This is not a fairytale 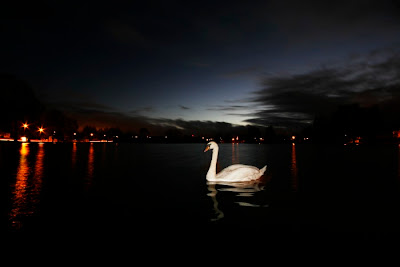 Once upon a time, there was a girl, her name was.. well it doesn't matter what her name was. That girl was all about love. She fell for a guy when she was really young, it was the very first time she got to know what love was. She had no worries then, she was happy and she never thought that things could go wrong with the two of them, so when they broke up it was terrible for her. Several months went by until she gathered the strength to stand up, and go on.
It was like she was hypnotized, she was so indifferent toward her environment, she did not even care if she looked ugly without make-up or if her hair wasn't fixed.
That girl, however, was not an ordinary one. She was always over thinking, she had always liked to observe people rather than live with them. She just enjoyed watching them go by, while she did nothing with her own life.
She tried very hard for her life though. She was a determined person. She felt very weak, but she didn't give up. Never. She always seemed so hopeful.
After getting into worthless relationships, she understood that she had to stop pretending, she realized that she had to sit down and get down to work. Work with herself. She had to stop pretending to be someone who she wasn't just to keep others happy. She had to stop feeling insecure all the time. She had to find herself. And love herself.
So, in the next two years, she decided that no one was getting in her way. There were times that she was feeling sad and depressed and lonely, but she had her friends by her side and to them, she owed much.
Then, she met a guy.. And she felt that special thing again. But nothing really happened with that guy. And so, she moved on, and she did not worry anymore.
She was feeling pretty good, she was much better than she was 3 years ago, yet something was missing. And then, she met another guy. Well, actually she got to know him before she even met him. In any case, she felt that something was pushing her to him, she felt like trying again, "maybe he is special", she thought.
I think, she wanted him badly, I don't know why, but I know she did.
She was hardly obeying to her mind, it was her heart she followed. She was afraid, cause he was a pretty smart guy, yet he looked a little bit confused and messed up. She was afraid because she didn't want to go through shit again. She liked him, but she didn't know how to behave, if she had to show it to him or not. If being herself was enough for him. So one day, he just got out of her life. He tried to explain, but she didn't understand. She felt for once more that something was wrong with her, that she had something that made people dislike her.
Now, that girl has not changed too much. She is getting rough lessons from life, but she still feels that she has no clue. Not even a small one. This time, however, at this point, she doesn't feel like trying. She just wishes she couldn't feel anything.
This is not a fairytale and it can't be one now. However, I think that there's a light of hope somewhere inside her. It's hard for her to talk right now. She just needs to stay in her room, turn off the lights and close her eyes.
And she wishes that one day this nightmare will come to an end. Maybe one day she'll find peace.
Την κρυφή σκέψη φανέρωσε η Hopeless Romantic γύρω στις 23:46

Never forget that once upon a time, in an unguarded moment, you recognized yourself as a FRIEND…

Happy endings do exist. You just have to let them happen.